The tetracationic cyclophane, cyclobis(paraquat-p-phenylene), also known as the little blue box, constitutes a modular receptor that has facilitated the discovery of many host-gust complexes and mechanically interlocked molecules during the past 35 years. Its versatility in binding small π-donors in its tetracationic state, as well as forming trisradical tricationic complexes with viologen radical cations in its doubly reduced bisradical dicationic state, renders it valuable for the construction of various stimuli-responsive materials. Since the first reports in 1988, the little blue box has been featured in over 500 publications in the literature. All this research activity would not have been possible without the seminal contributions carried out by Siegfried Hünig, who, not only pioneered the syntheses of viologen-containing cyclophanes, but also revealed their rich redox chemistry in addition to their ability to undergo intramolecular π-dimerization. This review describes how his pioneering research led to the design and synthesis of the little blue box, and how this redox-active host evolved into the key component of molecular shuttles, switches and machines.

A temperature-triggered supramolecular assembly strategy is used for fabricating highly ordered organic semiconductor arrays. The central concept of molecular design — named the Tetris strategy — is to increase the rotational freedom of the molecules through thermal perturbation, thereby inducing conformational locking of adjacent molecules as a result of cooperative [π•••π] interactions. 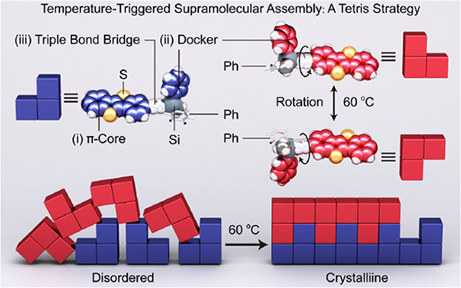 Positively charged pyridinium units can serve as efficient electrostatic anchors to form robust gold–molecule–gold junctions. Binary conductance switching in such a dicationic viologen molecular junctions has been observed by dint of an electron-injection-induced redox-switching mechanism.

Intramolecular circuits are built with two-channel charged cyclophanes. An interchannel gating effect and constructive quantum interference act synergistically, leading to a conductance that is 50-fold higher than that of a single-channel control, breaking the single-molecule superposition law.